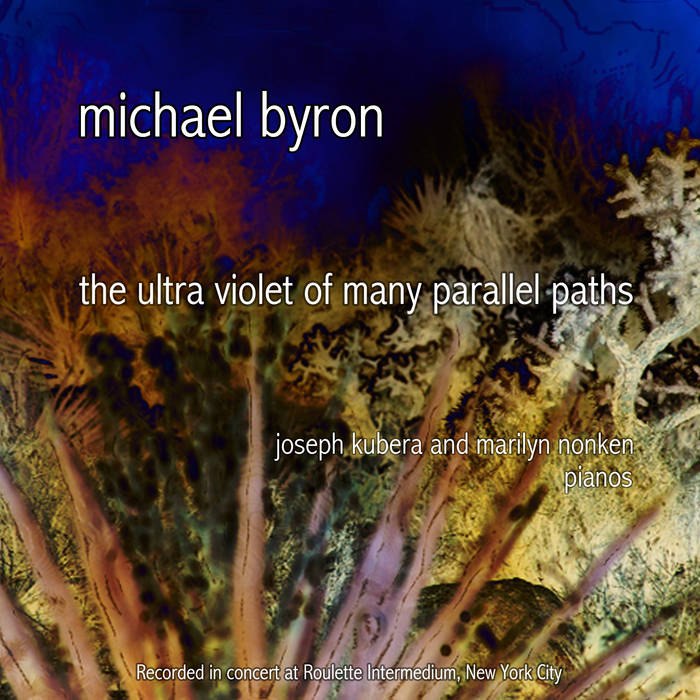 “The Ultra Violet of Many Paralel Paths” was released recently. Interesting and modern album was recorded by Joseph Kubera and Marilyn Nonken (pianos). The compositions of the album were composed by Michael Byron. Michael Byron is a conemporary academical music composer. His music is usually based on various styles of modern classical music, academic avant-garde, experimental music and avant-garde jazz. This huge and natural synthesis gives us gorgeous, effective, colorful and interesting sound. Michael Byrono has modern composing style, which is based on expressive playing manner, innovative musical decisions, inventive and fascinating instrumentation and bright musical language. Dozens of different composing techniques are used here – puantilism, serialism, the elements of concrete and spectral music, experimental and electronic music, atonal and tonal system, mild intonations of dodecaphony, minimalism and many other very well-known composing techniques of 20th century. Music is especially expressive, vivid, vivacious and bright – the main elements of expressionism and post expressionism, impressionism and modernism are fused together in one place. Organic and effective synthesis of various musical language elements turns the compositions of Michael Byron into gorgeous, modern and remarkable masterpieces.

“The Ultra Violet of Many Paralel Paths” compositions were written for two pianos. The pianists Joseph Kubera and Marilyn Nonken were recorded it. These two pianists are individual and interesting musicians. Each of them has its own playing manner, suggestive and effective style, the ability to reveal the most beautiful and sensible places of the compositions. Pianists are usually playing the music which is written by contemporary academical music composers, experimental music or avant-garde jazz masters. Their music usually can be easily interpretated in many different ways, forms and characters. Expressive and passionate playing, bright, harsh and turbulent solos, free and spontaneous improvisations, sharp and colorful harmony, difficult musical language, all kinds of different scales, chords, tunes and colorful stylistic waves – these and many other elements are masterfully fused together in one place. The compositions of this album demonstrate the main and the most important points of Michael Byron composing style. Distinctive and difficult musical language is filled with dynamic, sudden and modern musical decisions, colorful and bright instrumentation and contrasting episodes which are changing each other silmunateously. After vivid, rapid and extremely active bursts of energy music gets to sudden abruptions, silent pauses or gets to engaging, gorgeous, gentle and sweet passages. Huge amount of different playing techniques is used here to express all these different feelings, colors and senses. The pianists are playing very emotionally and with passion. They are not just playing the right notes in the suitable tempo and rhythmic – noth of them are experimenting in all fields of musical language. That especially feels in instrumentation section. Musicians are fusing together modern instrumentation, extended playing techniques and their own and specific ways of playing. The result is colorful, moving, touching and energetic compositions with marvelous passages, extremely rapid roulades, bright, harsh, sharp or aggressive solos, engaging and passionate melodies or silent and relaxing episodes. Along with suggestive and effective musical language there’s also are other elements which are very important to whole sound of the album. The stylistic synthesis between various music styles puts this music between many different music styles. Free facture, open form and spontaneous solos create a strong relation with avant-garde jazz and free improvisation. Sound experiments, repetitive rhythmic and melodic intonations, various composing techniques of contemporary academical music bring the sound of academic avant-garde and experimental music. All these elements are organically integrated in one place – it’s never used as a pure element. Rich and engaging variety of different music styles makes a strong effort to whole musical pattern and sound – it makes the music even more interesting, bright and rich. It’s impossible to say exactly, what’s the style of this music. It’s always somewhere between bright and spontaneous free improvisations, expressive solos, bright and fascinating musical experiments or touching passages. The music of this album surely has interesting, fresh, evocative and bright sound.