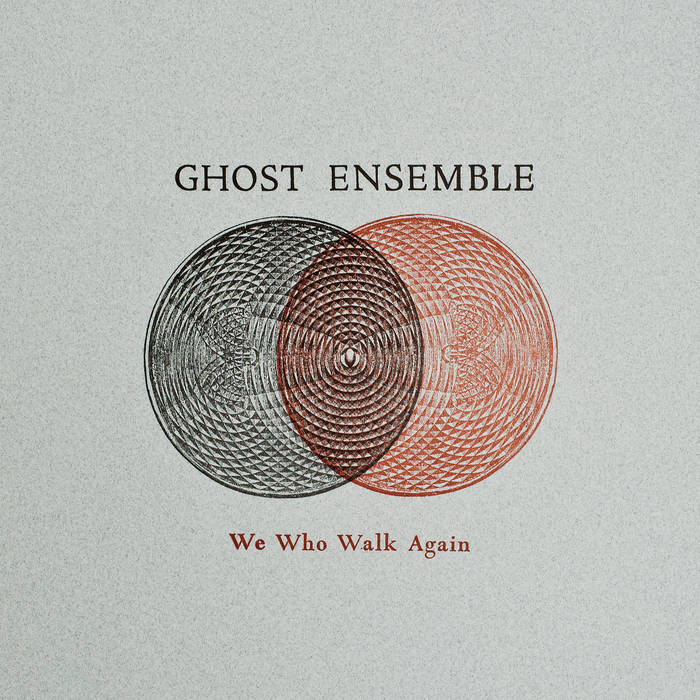 “We Who Walk Again” was recently released by “Indexical”. Album music was recorded by contemporary music collective “Ghost Ensemble”. The ensemble music is based on free improvisation and synthesis of various modern music styles. All the members of ensemble are creative and remarkable musicians – each of them has its own and original playing style, modern manner and unique sound. The ensemble had been formed in 2012. Since then, ensemble became famous for interesting, evocative and original compositions, which are filled with various styles of contemporary academical music and free improvisation. Post-expressionism, post-romantism, modernism, experimental music, academic avant-garde, electronic music and many other similar styles are organically connected together. Musicians are trying new ways of playing – their music is full of interesting and colorful timbres, sounds and tones. The academical music elements are fused together with free improvisation. The most part of their compositions has free spots for creative and spontaneous solos, inventive musical decisions and many other elements. That brings moody, contrasting and evocative sound. The “Ghost Ensemble” performs the compositions written by modern, interesting and evocative contemporary music composers or members of the ensemble.

“We Who Walk Again” has three compositions which were written by different composers, which are members of the orchestra. It’s “60 Degrees Mirrors” by Sky Macklay, “Angels and Demons” by Paulina Oliveros and Ben’s Richter’s composition “Wind People”. Three compositions are absolutely different from each other. Each composition has its own sound, interesting and evocative musical language, colorful and suggestive orchestration and wide range of different musical expressions, sounds, timbres and tones. All the compositions are based on dynamic rhythmic and synthesized form. The form is fused by elements of various classical forms and open forms of avant-garde jazz. All three compositions have free and open forms, which are constantly changing all the time. All kinds of different rhythms are used here – dynamic and speedy, slow and monotonic, very rapid and joyful, or heavy and vibrant – various types of rhythmic formulas are used here. These elements are gently combined together with free improvisation, intonations of various Europe contries ethnical music and other similar things. The musicians are playing especially expressively, have remarkable and impressive playing style and are full of evocative, creative and astonishing ideas. “60 Degrees Mirrors” is very expressive and passionate. Colorful and inventive instrumentation, experimental ways of playing, sharp and aggressive harmony, dynamic rhythmic and other similar things help the composer to create effective, original, rich and colorful musical language. Virtuosic and rapid passages, impressive and furiously fast solos, dark and heavy tremolos and drum rolls, turbulent and dramatic culminations, aggressive, sharp and harsh solos are gently fused together. This composition is based on contrasting episodes, which are used silmunateously – that makes an effort to colorful, unpredictable and modern sound of this composition. “Angels and Demons” has similar mood, but different musical language. This composition, as same as the fist one, is especially expressive, striking and moving. Virtuosic, memorable and emotional melodies, vivid and gorgeous solos, colorful and extraordinary sounds, strange timbres, sharp harmony and wide range of different musical expressions and inventive playing techniques make an effort to evocative, vivid and vivacious sound. Along with contemporary music elements, the intonations of ethnical Spain music are used. The marvelous and organic synthesis between traditional and contemporary Spain music and modern academical music styles is one of the most important element of Paulina Oliveros composing style. Free improvisation also are heard very much in this composition. Free, expressive and turbulent solos, musical experiments, searches of extraordinary sounds and inventive musical decisions make the sound more colorful, emotional and contrasting. The final composition “Wind People” is the opposite to the others. Calm and silent mood, abstract musical pattern, soft and peaceful chords or separate tones create quiet and subtle sound. Slow tempo, unusual sounds, eclectic instruments combinations, experimental ways of playing, static and dark tones and other similar things make effective and meditative sound. This composition is totally based on abstract musical pattern and separate tones which are constatly continued and changed with others. There’s no separate and bright melodic or rhythmic pattern – melodic and rhythmic intonations are organically nd effectively fused together in one place. Repetitive and monotonic chords, soft harmony, simple musical pattern bring many relations of minimalism and post-minimalism. The music of this sound is based on synthesis between minimalism, post-minimalism, experimental music, academic avant-garde and free improvisation. It has effective, extraordinary and meditative sound. The album is a great set of three compositions, written by talented composers – each of them has its own and modern musical language, original composing style and likes to experiment in all sections of musical language.

My Tweets
Join 140 other followers