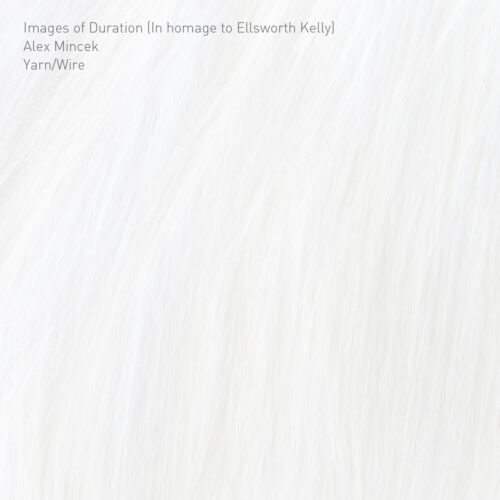 “Images of Duration” is the newest release of “Northern Spy”. Album was recorded by percussion and piano quartet “Yarn/Wire”. The compositions for this collective were written by Alex Mincek in hommage to Ellsworth Kelly. “Yarn/Wire’ quartet is evocative and innovative contemporary music ensemble, which mostly interpretes the music written by contemporary academical and modern music composers. Ensemble also frequently plays the engaging, original and modern interpretations of various classical music compositions. Their music are based on sound experiments, rich, variable and abstract musical language and always have effective and remarkable sound. Musicians are the masters of touching, experimental and innovative playing – they are trying out new and eclectic instrumental combinations, expressing wide range of moods and mixing up together new ways of playing, different characters, playing manners and expressions.  Alex Mincek is a famous contemporary academical music composer. His musical language is hgihly effected by various contemporary academical music and 20th century music styles. The basic is formed from the main elements of minimalism and post-minimalism. Repetitive rhythmic and melodic structures, simple and minimalistic form, ordinary harmony are fused together with the intonations of experimental, electronic, concrete and spectral music. Compositions also have relations with academic avant-garde and other contemporary academical music styles. Music by Alex Mincek is based on eclectic rhythmic, stylistic and melodic combinations, mixes of various playing and composing techniques, original and evocative instrumentation and bright musical decisions. All these elements make an effort to interesting, evocative, extraordinary and engaging sound.

“Images of Duration” is based on effective sound, innovative musical decisions and synthesis of various music styles. Composer bases his music on minimalism – all main elements of it are charmingly fused together. Various rhythmic combinations, dissonance and consonance chords, short and simple melodic elements contain the main base of the compositions. The musical language is extraordinary and interesting – it’s highly differs from the compositions of other composers. Simple, ordinary and traditional form is mixed with rhythmic, melodic and harmonic elements, which are repeated silmunateously by using the method of repetition. That makes an effort to eclectic, weird and natural sound of the album. These compositions are started with absolutely abstract form and ascetic, austere, solemn and subtle sound. Silent and separate sounds, various rhythms and weird timbres contain the main base of the music. The beginning of the album is totally based on minimalism and post-minimalism elements. Music gets much more moving, touching and variable in the middle of the album. Silent and subtle melodies, ordinary rhythmic structures and static chords are straightly fused together with weird timbres, specific playing techniques, the elements of concrete, spectral, electronic and experimental music. Independent and charming melodies are made from the short melodic elements and separate sounds, which were continuously repeated in the beginning of the album. Cols, subtle, calm and solemn sound turns out to moving, attractive, passionate and remarkable solos, enchanting and extraordinary sounds, effective and innovative musical decisions and fascinating musical experiments. The musical facture modifies several times in various compositions – from simple and ascetic it turns to difficult, complicated and polyphonic. Composer not hesitate to combine together absolutely different musical language elements and expressions. All kinds of different timbres, osunds, expressions, chords, shapes, playing techniques and factures are mixed together. This music is easy to modify – its simple structure is open to sudden and unpredictable stylisitc changes, musical experiments in all sections and producing of eclectic, engaging, weird and strange sounds. The basic of the album is kept the same through all the compositions – main elements of minimalism and post-minimalism are combined together with other contemporary academical music styles or used authentically as a pure element. Four musicians of “Yarn/Wire” are creating effective, remarkable, modern and innovative sound. Theit playing is touching, bright, passionate and expressive. Musical experiments, special effects, innovative instrumentation, modifications of various elements of musical language, authentic and natural synthesis of various composing techniques and innovative musical decisions – all these elements make remarkable, bright and original sound of this album.