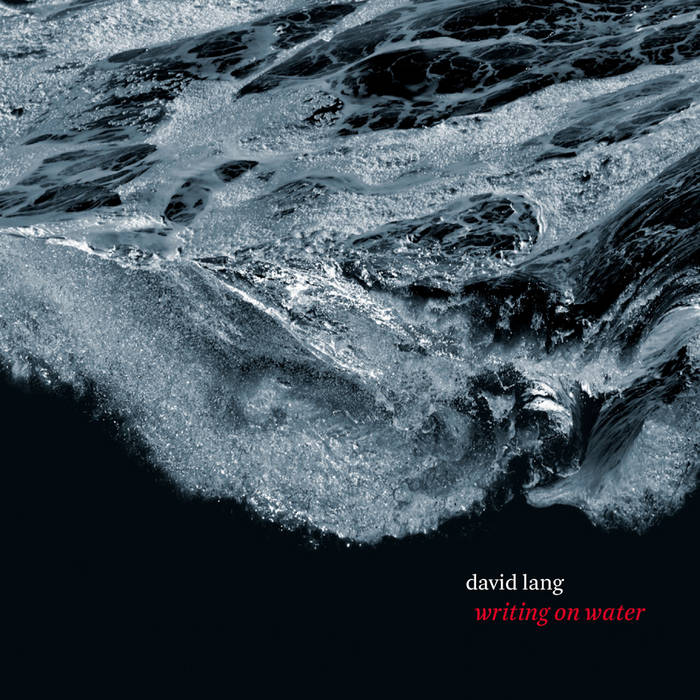 “writing on water” was released on April 20, by “Cantaloupe Music”. This academic avant-garde music album was recorded by the best and the most remarkable collective and ensembles of contemporary academical music scene. The compositions by composer David Lang were recorded by “Synergy Vocals”, “London Sinfonietta”, “Alarm Will Sound”, “Real Quiet” and “Crash Ensemble”. David Lang is a contemporary music composer. His music is based on various forms and styles of contemporary academical music. Minimalism, post-minimalism, the intonations of serialism and dodecaphony and many other playing techniques are gently combined together with electronics and other musical language elements. Post-minimalism, the traditions of 1960 minimalism are gently combined together with electronics, repetitive music elements, puantilism, concrete and spectral music and other elements. The music of David Lang also is full of eclectic combinations with various rock styles. The musical pattern of the compositions are full of interesting and original musical decisions, strict and minimalistic musical pattern, repetitive rhythmic figures and melodic elements. The harmony is very variable and dynamic – from the soft and consonance chords this music suddenly gets to sharp and dissonance. David Lang writes the compositions to various compilations – solo pieces for piano or other instruments, chamber music, vocal compositions, pieces for symphony orchestras and string quintets.

“writing on water” has interesting and evocative sound. Four compositions were recorded by five different and famous chamber ensembles and orchestras. The composition “writing on water” was recorded by “Synergy Vocals” and “London Sinfonietta”, “forced march” recorded by “Crash Ensemble”, “increase”, played by “Alarm Will Sound” and the last one – “pierced” was recorded by “Real Quiet’ and “Flux Quartet”. All these four compositions highly differ from each other. Each composition has its own character, unique musical language and unusual sound. The main and common element in all the compositions is the synthesis of modernism, minimalism, post-minimalism and rock music. The compositions have difficult and bright musical language. “writing on water” has soft and interesting sound. Here different vocal playing techniques are fused and mixed together in one place. This composition has soft, original and subtle sound – it starts with subtle and silent beginning and then gets to expressive and dynamic culmination. “forced march” has remarkable and expressive sound. The elements of rock music are very clearly heard in this composition. Expressive sound, repetitive solos, soft and variable harmony, synthesis between consonances and dissonances, bright musical language and creative orchestration decisions – all these elements bring ex[ressive and interesting sound. “increased” has a remarkable and vivacious sound. Various unusual timbres, weird sounds, especially huge variety of playing techniques and musical expressions – all these elements highly effect whole sound. Composer is the master of combining many different musical language elements, styles and intonations all together. This compositions has an active and bright sound. The last one composition “pierced” also is based on interesting and innovative orchestration decisions, original and inventive musical decisions and evocative sound. All the compositions of this album have expressie, vivacious and dynamic sound, are based on minimalism, post-minimalism and its main elements. The main basic of the mucial pattern for the most of the time is repetitive rhythmic and melodic combinations, monotonic harmony, interesting and expressive solos and huge variety of playing techniques. Interesting and colorful orchestration leads to high amount of unusual timbres and weird sounds. All these elements are gently combined together with electronics. The electronics are used very subtly and soft – it’s used more like coloristic element. Various sounds of computer devices, synth sounds and other elements make bright and evocative sound. This album is based on masterful and organic synthesis between minimalism, post-minimalism, electronic, modernism and rock  – all these elements are colorfully and inventively combined together in one place and make evocative and remarkable sound.