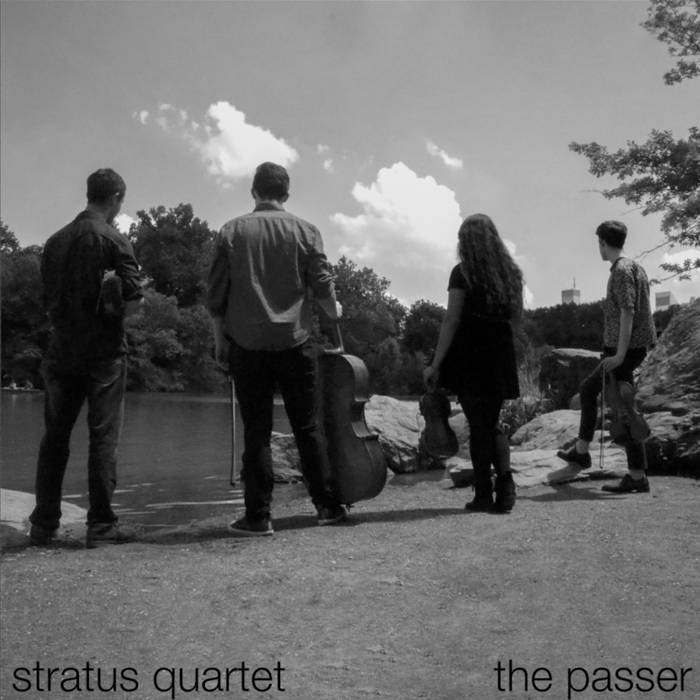 “The Passer” is the new contemporary academical music album which was released on November 2. Album was recorded by “Stratus Quartet” – string quartet which all music is based on free improvising and spontaneous musical decisions. Violinists Benjamin Sutin and Zosha Warpeha, violist Nathan Karnal and cellist Samuel Quiggins are interesting and creative musicians. Each of them has original, modern and innovative playing manner, rich and colorful musical language and unique sound. The ensemble differs from other string quartets – its members are playing not just other contemporary academical music composers compositions, but also quartet members created works. All music performing is based on spontaneous and creative improvising, vital and vivacious playing which is full of unpredictable stylistic waves and different moods. Individual and original playing styles, playing manners, sounds and various musical expressions are gently combined together in one composition.

The compositions of the album are based on academic avant-garde and free improvisation. Musicians try out many different playing techniques, expressions and sound effects to create extraordinary and interesting sound. The basic musical pattern of all compositions has several main elements – polyphonic structure, free form, sharp and dissonance harmony, independent melodies which are strongly contrasting with each other and very inventive instrumentation, Each composition is based on free and spontaneous playing – wild fast arpeggios, sudden and loud glissando, soft and gentle pizzicato, staccato, portato and many other traditional playing techniques are masterfully used in these compositions. All these techniques are subtle and effectively twisted with innovative and unusual ways of playing which make numerous of colorful, strange and weird timbres. Musicians expressive, vital and dynamic playing is the main element which highly effects sound of the album. Memorable, vivacious and expressive melodies are combined with lyrical, dramatic, sad or solemn and peaceful episodes. This change of moods and characters makes music to sound more interesting and unpredictable. Free and creative musical experiments, wide range of different musical expressions are the main elements of musicians melodies. It fills compositions with extraordinary musical decisions and surprises, spontaneous improvising and dynamic sound. The musical pattern of compositions is based on several lays and patterns. The basic and most important is melodic basic – expressive, emotional, vital and adventurous melodies bring interesting and dynamic sound to this compositions. The harmony is mostly based on different chords which are dissonance. Sharp and colorful chords is highly effects the sound – it makes music to sound more dramatic, modern and emotional. There’s also are some chords which have smooth, soft and relaxing sound – mostly it’s separate sounds or consonance pitches. The rhythmic is another important and interesting element which is very different in each composition. Sometimes it’s very static and slow, sometimes – very dynamic, fast, repetitive or constantly changing. The rhythmic basic is formed by various instruments, but mostly with cello. Intensive, vivacious and dynamic rhythmic and dossonance harmony are the main elements which form a solid and strong background. Expressive and vivacious melodies and interesting background are the main elements of these compositions. The most important thing which makes this music to sound gorgeous and outstanding is free, spontaneous and passionate playing of all musicians. Rich and modern musical language, wide range of different musical expressions and inventive playing create interesting and marvelous sound of this album.