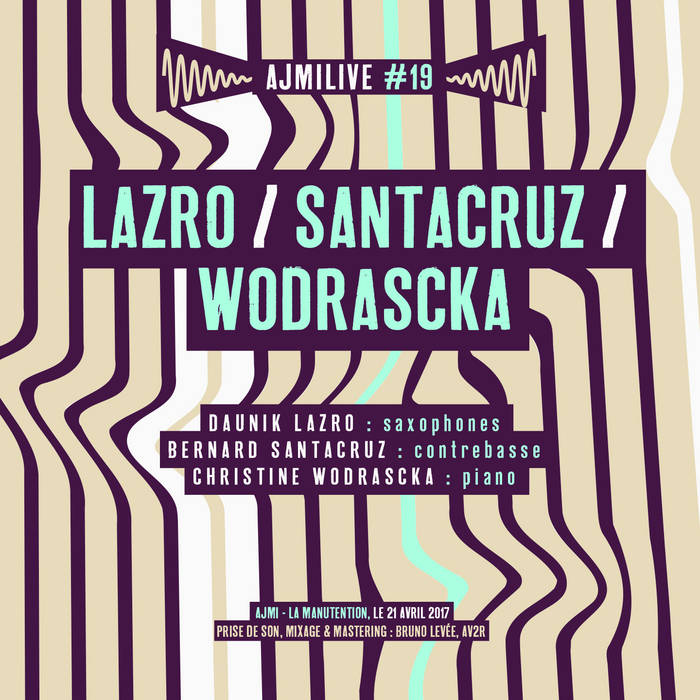 “AJMiLIVE #19” is an avant-garde jazz album released on November 3. The album was recorded by Daunik Lazro (saxophones), Bernard Santacruz (contrebass) and Christine Wodrascka (piano). The compositions were recorded in music club “La Manutention” on April 21. These three musicians had been improvising together many times before this recording. Improvisations are dynamic, have interesting, vivacious and innovative sound. Musicians are the masterful avant-garde jazz improvisers which had formed and marvelously improved their own playing style. They always try to create extraordinary, colorful and unusual sound. Because of it, their improvisations are always full of different musical expressions, various episodes which are highly contrasting with each other and extended playing techniques. This album is a great opportunity to hear three outstanding jazz musicians improvising together.

Album compositions are based on free form, collective improvisations and avant-garde jazz elements. Musicians try out many different musical expressions, ways of playing and other musical language elements to create extraordinary and interesting sound. Daunik Lazro saxophone improvisations are dynamic and constantly changing. He use many different playing techniques, demonstrate his own and unique playing style and is experimenting in sonic sistem sounds, special effects and unusual timbres search. The improvisations are based on several episodes which are strongly contrasting with each other – subtle, calm and silent solos are connęcted with some very energetic, vivacious and active pieces. Saxophonist playing bring to the compositions original and interesting sound, gently fits together with Bernard Santacruz and Christine Wodrascka improvising. Bassist Bernard Santacruz improvisations also are subtle and calm for the most of the time. Calm and relaxing episodes, vibrato, unusual sounds and weird timbres, separate melodic and rhythmic elements are the main and most important elements of his improvisations. Bass improvisations form a solid and strong background and rhythmic basement of the compositions. Christine Wodrascka piano brings more live and colors to the compositions – her improvisations contain of various episodes, marvelously combined together. Aggressive, dark and powerful chords are blended with soft and colorful harmony, relaxing and peaceful episodes – with active, monotonous and energetic improvisations. Her music is very interesting and always changing. Wide range of different playing techniques, her own playing sound and style and musical language elements are masterful combined together in one composition. Piano and saxophones duos are the most effective episodes of the album – it’s somewhere between active, free and expressive collective improvisations and relaxing, calm and peaceful episodes with no melodic basement and based on separate timbres and sounds. The dynamic changes of moods and characters highly effect the main sound of the improvisations – that makes it more lively, dynamic, colorful and bright. Outstanding and inventive improvising, high variety of various musical expressions and elements make original and adventurous sound of this album

My Tweets
Join 140 other followers