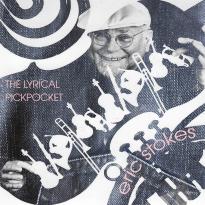 “The Lyrical Pickpocket” is a new academical music album released by “Innova Records”. The compositions by Eric Stokes (1930-1999) were recorded in this album. Eric Stokes was a famous and interesting American composer. His musical language is full of rich and colorful stylistic waves, sudden and dynamic moods and characters changes, wide range of gorgeous musical expressions, playing techniques and many other elements. The composer pay the most highest attention to the compositions sound – his music is always very dynamic, interesting, full of unexpected instruments solos, inventive musical decisions and free experiments. Eric Stokes music is based on his individual and unique composing style which has much in common with various modern classical music styles and composing techniques. This music is highly effected by expresionism, post-romantism, has much elements of atonality, aleatoric music, serialism, dodecaphony, puantilism and some of other styles elements. He mostly wrote music for chamber ensembles – various instruments quartets, quintets, chamber ensembles, symphony orchestra and pieces for solo piano or other instruments. Expressive, dramatic, vivacious music is gorgeously played by “Riverside Winds” reeds ensemble, soprano Maria Jette, pianist Sonja Thompson, oboist Merilee Klemp, harpist Kathy Klenzie and timpanist Jim Jacobson.

Album compositions were written for chamber ensembles, solo compositions for voice and other instruments and pieces for percussion and piano. “Woodwind Quintet No.2” and “The Lyrical Pickpocket” are dedicated for woodwinds chamber ensemble and piano. These compositions are formed of several parts which are very contrasting with each other. “Woodwind Quintet No.2” has 4 parts. All of them are highly contrasting with each other. Dramatic, full expressionism and post romantism elements, very vivacious and colorful or silent, solemn and restful – all these elements, different moods and characters are masterful combined in one composition. Inventive, bright and modern instrumentation decisions are used very much in these composition – traditional instrumentation is fused with original, interesting and innovative ways of playing. The “Lyrical Pickpocket” has 6 parts and also is very dynamic and vital. Dynamic and sudden stylistic changes, expressive and marvelous combining of different musical expressions and instrumentation techniques create vivacious and contrasting sound. The composition “Give and Take” is dedicated for oboe and viola. This composition is more lyrical and soft. Various instrumentation techniques and different expressions, vital and highly contrasting with each other episodes are professionally combined together in one composition. This composition has a soft sound, medium slow temp, quite simple and ordinary musical pattern, which is formed of various separate sounds, short melodic episodes and interesting background.

The compositions of this album have expressive and dynamic sound – sometimes it’s very joyful, lively and expressive. Then it gets to be lyrical, dramatic or even tragic. It’s also heard very much of emotional and passionate episodes. Wide range of different moods and characters is professionally used in these composition. The musicians playing isn’t just a precisely and professional. It’s also very vivacious, lively, emotional and passionate. They reveal and demonstrate the main elements of Eric Stokes musical language and composing style. These compositions have a sounds from various 20th century composers – John Cage, Charles Ives, Henry Brant and many others. Post-romantism, expresionism, impresionism, various modernism styles and academic avant-garde elements are gorgeously combined in one composition.